Steven Caple Jr. Is Mentoring The Culture Through His Films

The complex and often endless cycle of crime and drug abuse that exists in many communities of color can serve as a hollow backdrop preventing Black men from flourishing. However, Steven Caple Jr. made his way out of this cycle and is remixing the narrative. The Cleveland, Ohio bred filmmaker’s story could’ve easily been one of the Black dude in any hood movie, one whose life is cut short simply for being in the wrong place at the wrong time. But Steven decided to rewrite the script, one where he’s chosen to inspire an audience through his storytelling.

Being there for those that aren’t your kids it’s a way of giving back. I feel like that is huge.

His debut film The Land, executive produced by Nas and starring Erykah Badu, follows the lives of four high school age boys struggling to sponsor their skateboarding dreams by selling drugs. “I just wanted to tell it from a different perspective. I wanted to reach the youth [of] today in some way or some fashion and explore the issues currently within the system. Basically, these kids are trying to make decisions, but to them each corner can feel as if it’s blocked off,” said Steven during an hour-long phone conversation.

When asked if his work leans more towards art or activism, he makes it clear how he provides a bridge for the two.“I like to label my work as art and that’s just with my sense of style. But when it becomes actual content, it becomes activism,” he says. “I guess it just naturally flows with who I am. I feel the only way I can inspire someone else is by showing them who I am. I’m not the dude that’s untouchable.” 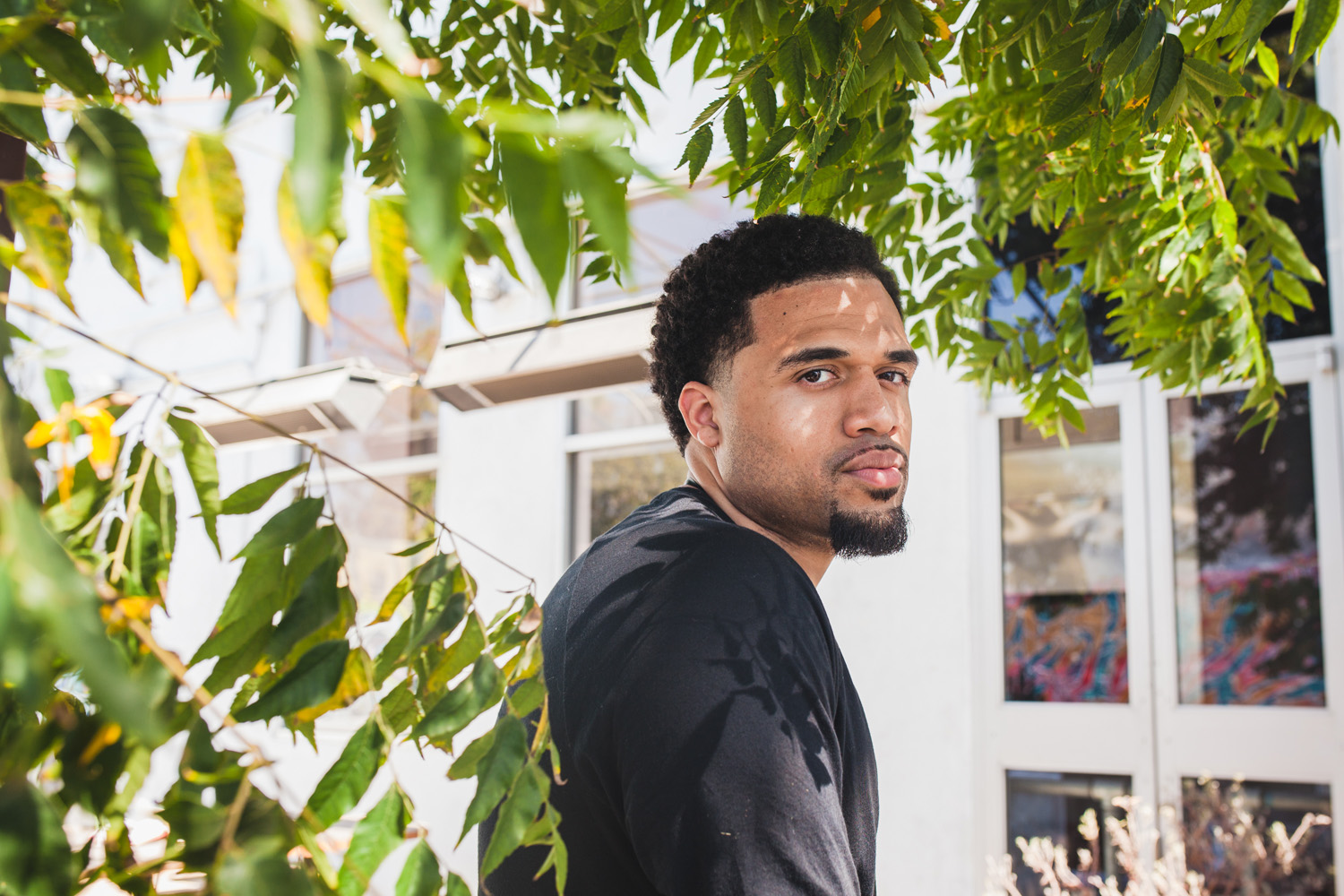 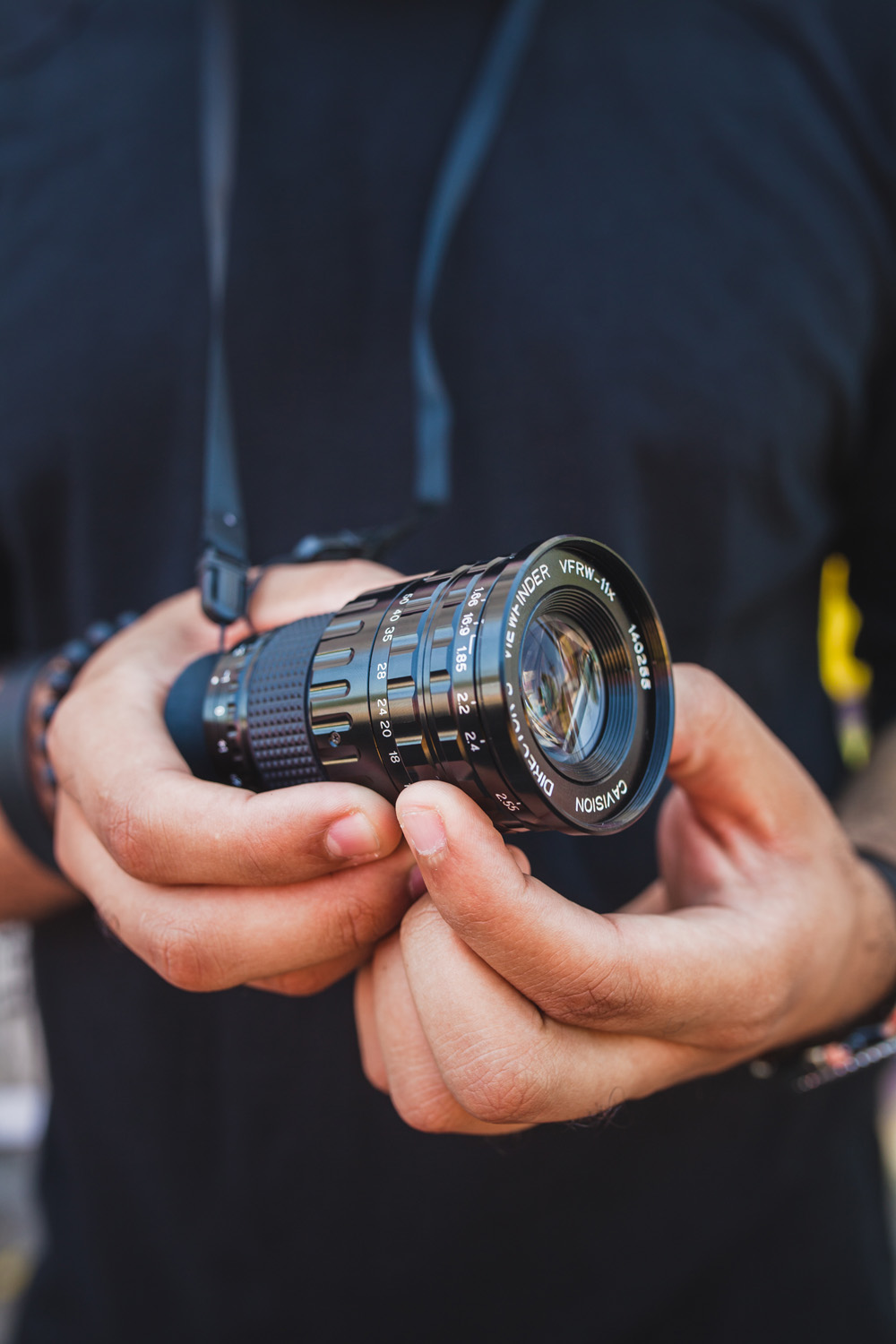 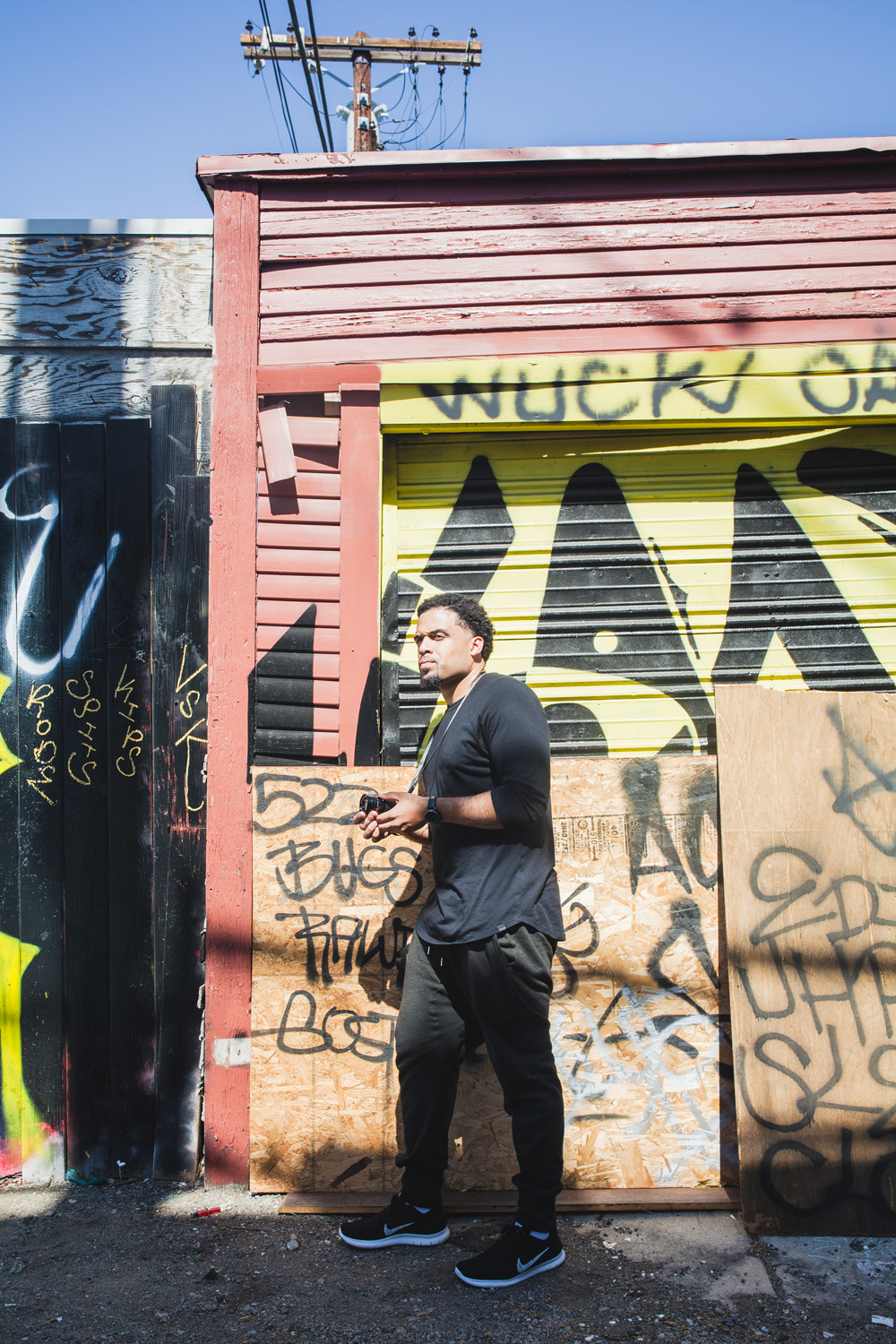 Currently, he’s working on penning the Emmett Till mini-series coming to HBO in 2017. “It’s really about purpose man, and I think right now I’ve been guided to tell stories that mean something, and they naturally fall to a little girl growing up without her father. It’s a short film I sold to HBO that’s a single parent home tale of kids growing up in a cycle and being labeled criminals,” he explains.

In order to produce the Emmett Till mini-series he’ll be working alongside an A-list production team consisting of Jay Z, Will Smith, Casey Affleck and Aaron Kaplan. For the Ohio native, this is more than just an opportunity to leverage his career. It’s about shedding light on a story he, and so many others, have yet to fully delve into.

“Throughout the years I thought he was hung until I was 18. Got to college, and took a course where we talked about Emmett Till and I was just enthralled. I was just like, yo this is crazy. I always had a connection after that,” Steven says. “No one really did their research on everything that happened to him.”

As a boy, long before he was forced to become a man at a young age by confronting the system, his family and friends penned him the nickname, “boobie.” While his mom may have given him his first number one haircut at the age of eight or nine, this did not induct him into manhood. There are three key moments growing up in Cleveland that broke and built him into the proud Afro-sporting-recently-married man he is today.

That’s where it starts man, with your mom, with your pops, whomever is in your family. Make sure we protect our kids and guide our kids and let them know at an early age what is going on.

The decision to transfer high schools was a pivotal moment in his life. “I went to a trade school where I was training to be a construction worker. That was my trade freshman year, where I begged and pleaded my mom to lie about her address to get me out, because I had to go to the school due to the zoning regulations. And she did it man. It was risky for her to do because if she got in trouble she could get fined. But she helped me out in the sense of getting me to another school, and that other school had a arts program. That helped expand my love for the arts and filmmaking I guess,” he explains. This transition to a specialized art school eventually allowed him to tap into filmmaking.

The second pivotal moment came during high school when his parents decided to get a divorce. “It was just a tough one for the family. We all knew it was coming. For the first time I had to become the man of the house, while caring for a younger sister. Even though we’re just four years apart, over the years I was teaching her how to play basketball, moved her into college and payed for her college books. In the end, it challenged me to wake up and be a man,” Steven said. 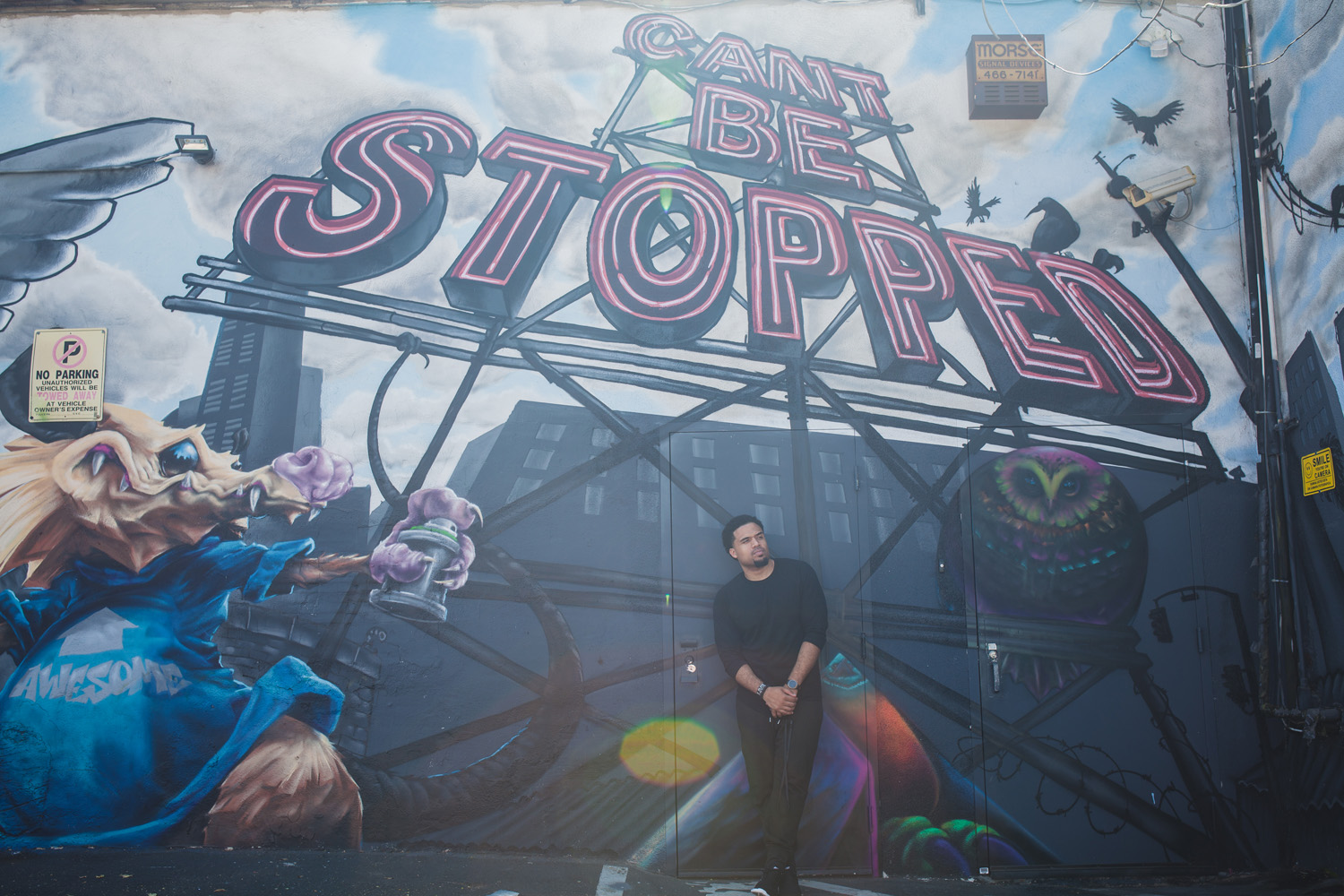 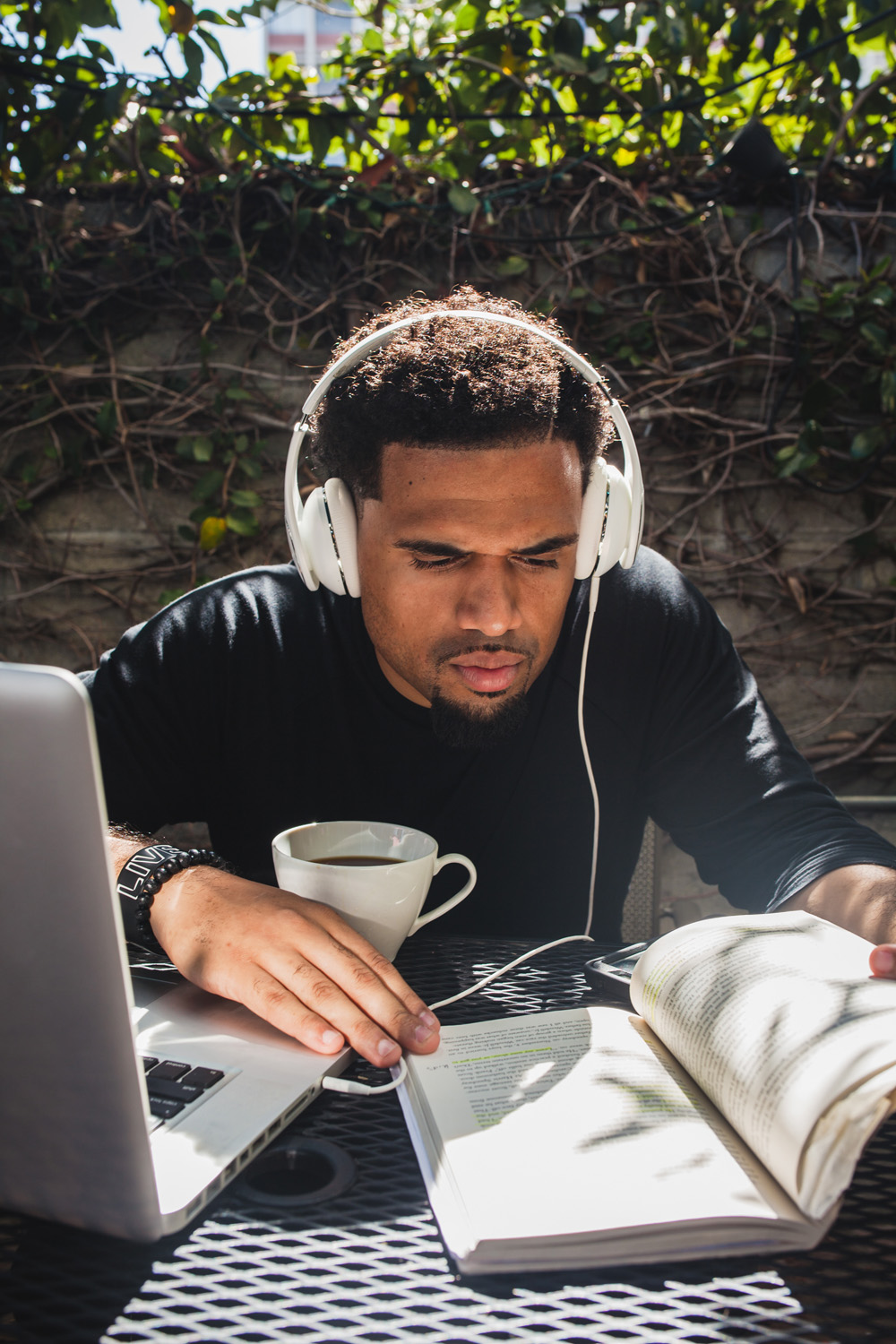 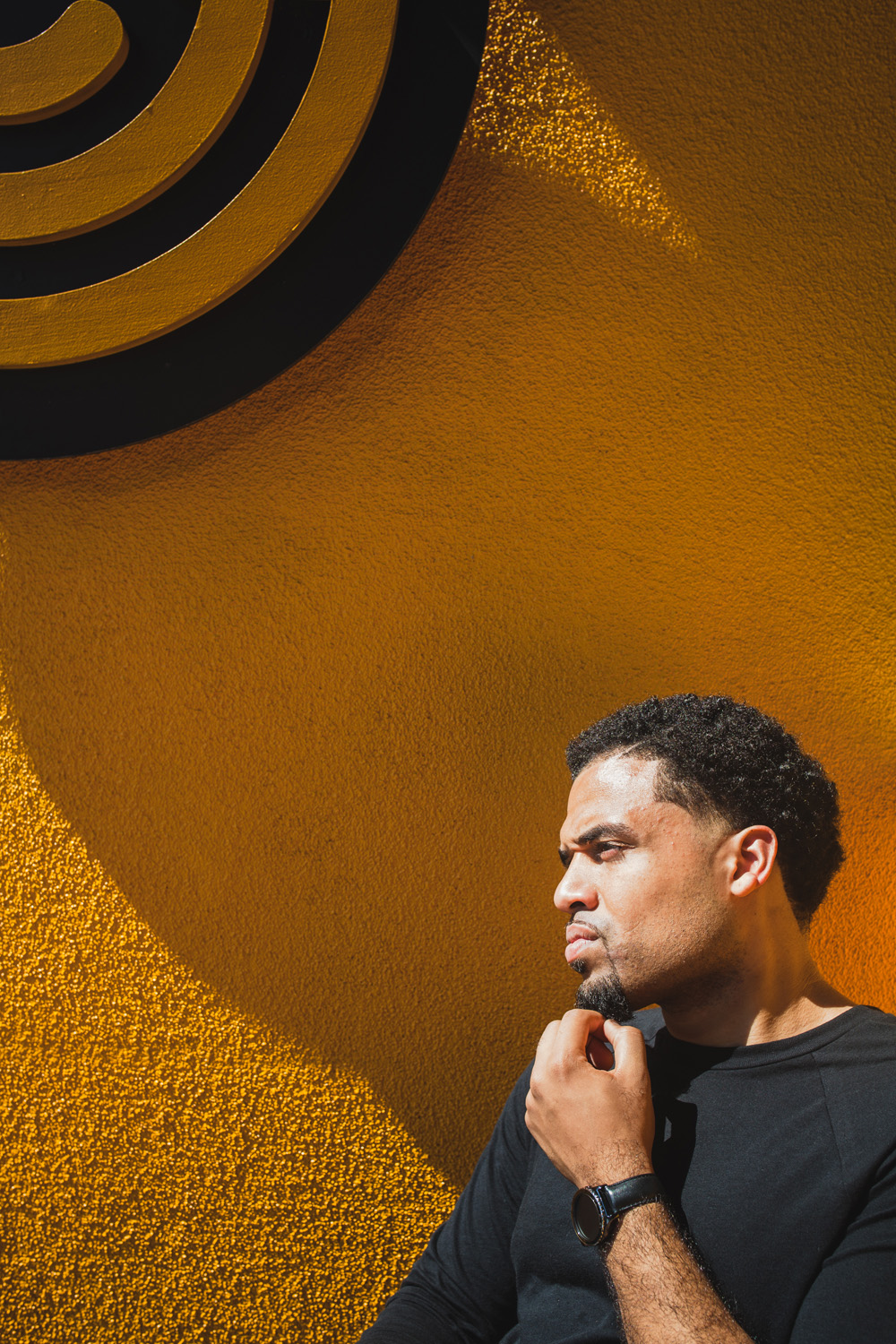 His first job soon became the third moment. “I had like three jobs in high school, one was at the nonprofit organization. I know it just goes hand in hand with being there for my family and providing, but there was a time where I had to quit basketball my senior year of high school and I wanted to be in the NBA, but at this time my grandmother was passing, my mom was working limited hours because she was taking care of her and I couldn’t afford to play basketball, it was like one of those things where I had to just help the family out. I picked up a third job. So I was working at the nonprofit organization. I was working at K-Mart and I was working at Famous Footwear.

“All three jobs were part-time due to the fact that I wanted a full time paycheck at the end of the week, which required me to quit basketball. This was huge because I wanted to be in the NBA by a certain age. I guess that dream kind of faded away, and I had to deal with the realities of who I was going to become and what was my real profession.”

“I had a non-profit organization down the street that helped me out. Around me was a family with crazy drug addictions. My Dad, and everyone except for me and mom, ultimately didn’t have anything without drugs. So my mom, trying to do something positive, just enrolled me in this non-profit organization down the street where they kind of played as my mentor,” Steven explained when asked why mentorship is so important to him. Steven now finds himself reaching back. He has a non-profit organization called, Engage the Vision, whose mission as outlined on the organization’s website is to educate and empower inner city boys and their families to set and successfully achieve life goals in a joyful, positive and prosperous ways, while making contributions to their immediate surroundings, communities and world through mentoring.

While continuing to play his part from behind the lens and through the grassroots work, he believes there are a couple of things that can be done to end this sort of cycle that exists within the African-American community, starting from within. 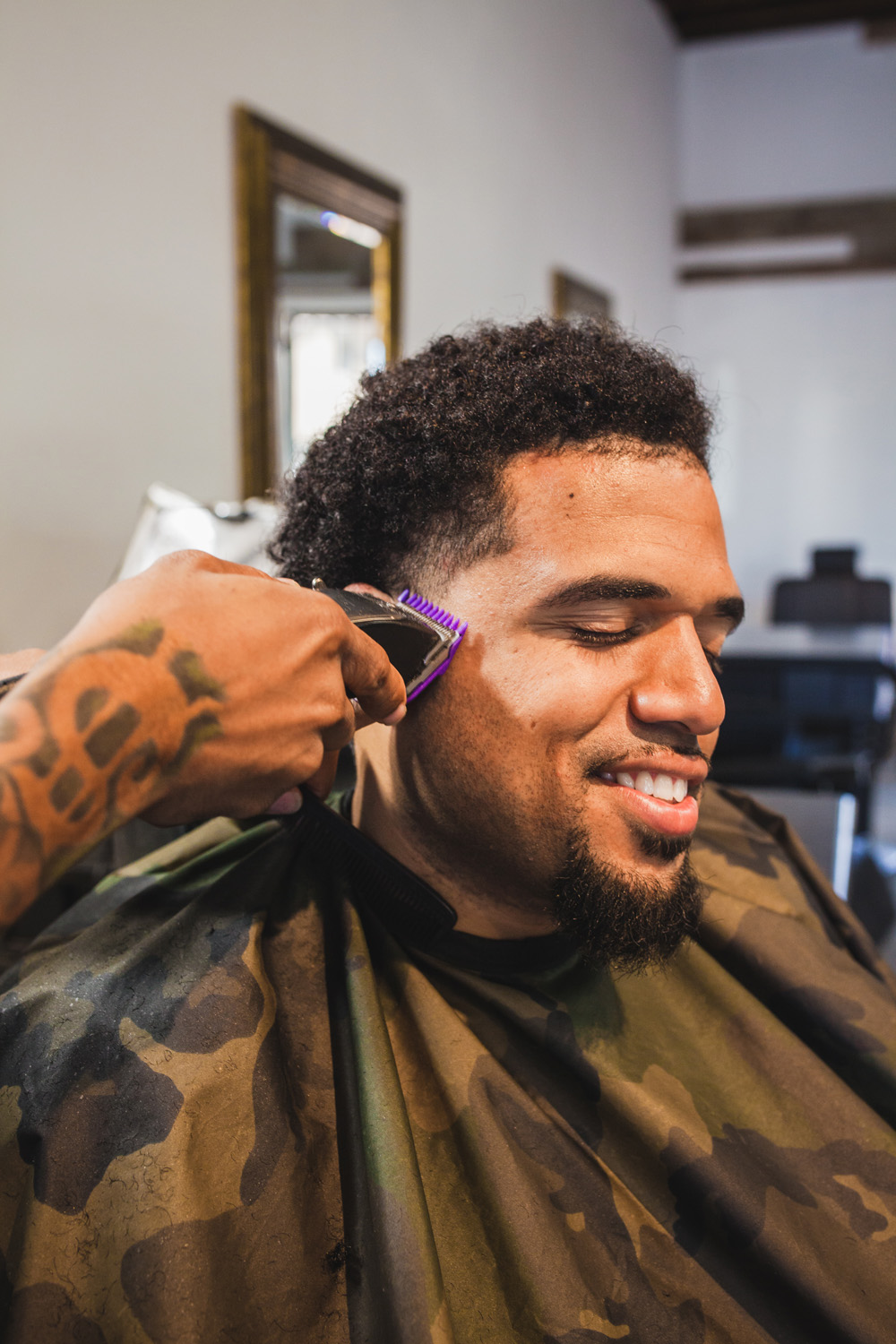 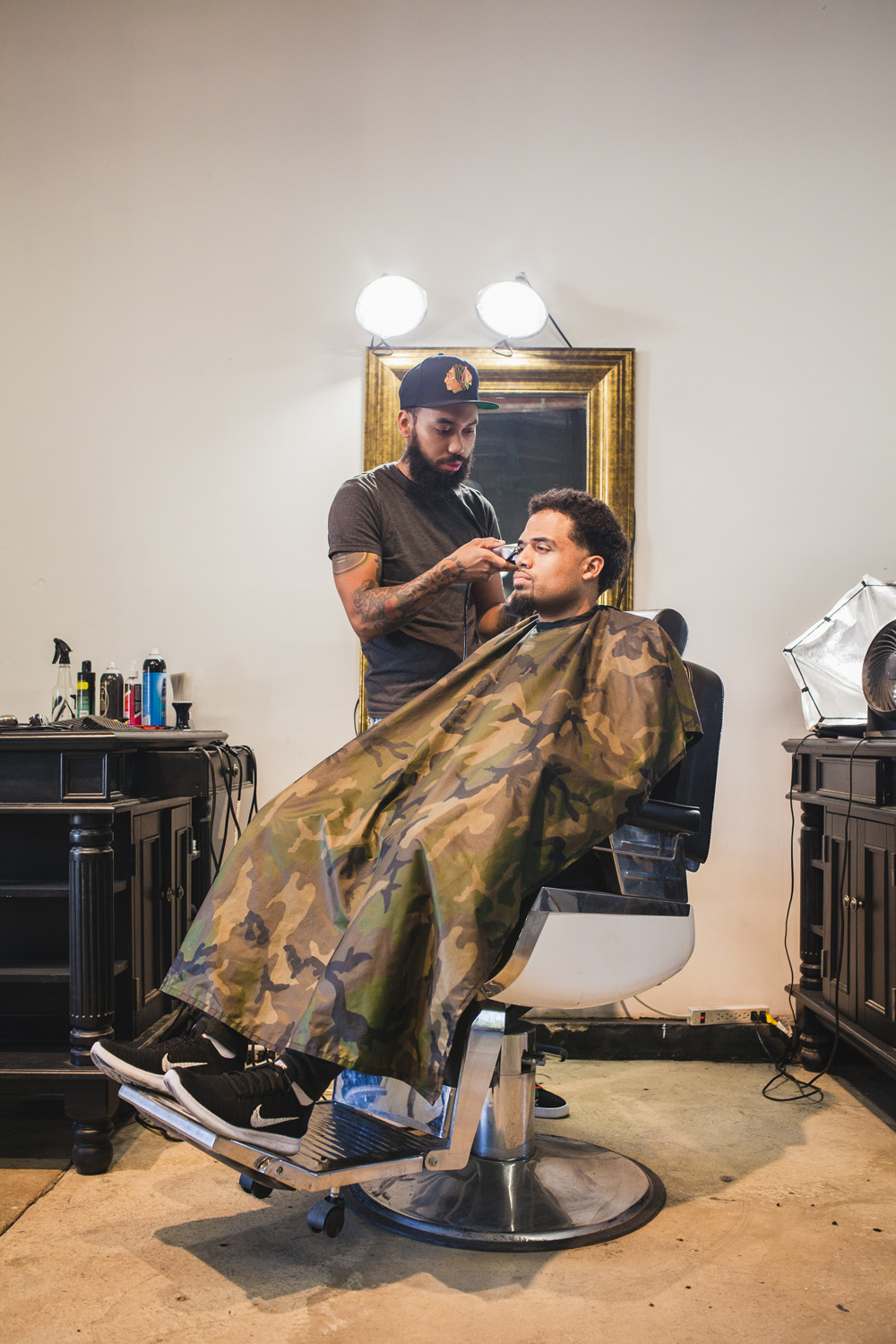 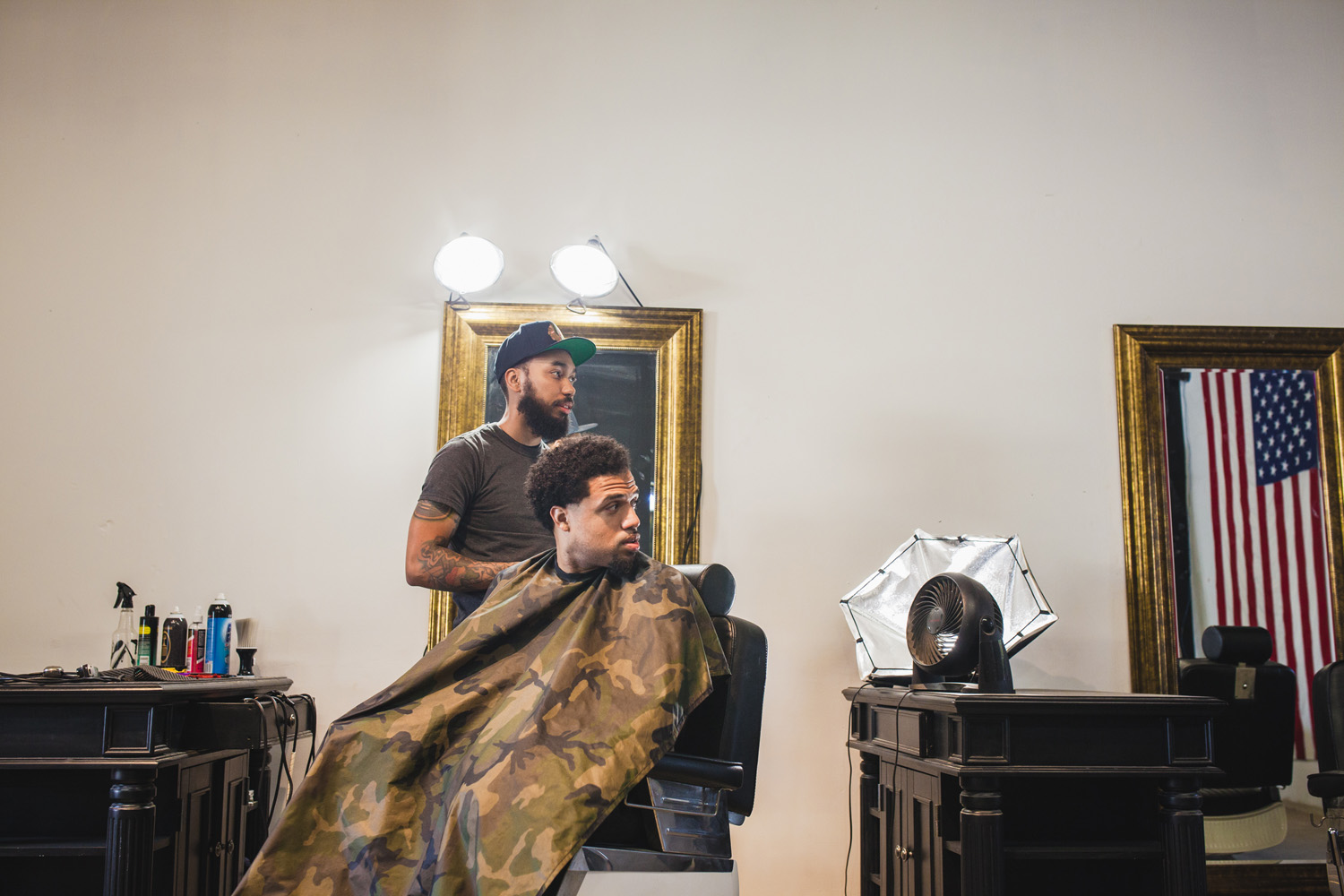 “It always starts with the home. I hate when people watch the news and people are like aww, man it’s you guys fault for whatever reason for whatever way they are raised. I think parents are doing what they can do at home. But that’s where it starts man, with your mom, with your pops, whomever is in your family. Make sure we protect our kids and guide our kids and let them know at an early age what is going on. When I was nine or ten years old, I was that kid running around with a BB gun all the time. That’s why when the Tamir Rice situation happened, it hit me so hard because I remember them saying, man watch out because cops may do this or the other to get really specific and I remember rubbing my head at like 9 or 10 and being like mom if cops come I’m just going to drop the gun really fast and let them know that I’m just a kid playing. And when I saw the Tamir Rice video I remember being like it’s time to drop the gun and let them know that I’m just a kid playing which is really scary. But my mom was there telling me at an early age and so informing our kids at an early age. And being there for those that aren’t your kids it’s a way of giving back. I feel like that is huge.”

As much as Steven has poured into the lives of youth he has also made it a point to make sure he’s receiving mentorship in his own life. Steven recently tied the knot with his high school sweetheart and Nas was there to offer life advice along the way.

“He’s always talking about family and he’s like, make sure your family is good. You know he has a brother, Jungle, who he talks about a lot. He talks about his upbringing, but I’m getting married soon and he was like make sure your family’s mesh and everything is cool on both sides, as you navigate life because that’s kind of who you have to fall back on,” Steven notes.

While Steven finds himself growing in his craft and pulling up to red carpets, their friendship has been there to help keep it all in perspective. “He has reminded me to keep my composure be cool don’t get caught up in all of the BS. And that’s where family becomes important because they do keep you grounded which is really dope, everything that he spits is like a lyric, it’s like poetry which is pretty cool,” Steven said.

With a career that’s evolved in non-traditional ways over the years, so has his look. He’s no longer rocking his mother’s number one cut. Today, he can be found wearing a shaped up afro. “I’m simple with it. I’m like the guy who just uses shampoo and conditioner and calls it a day. But I just bought this foam curl brush and I just started using that like three months ago and it just makes the curls the way you want it. I just put it on it and walk out the house. So that’s probably like the only product I really use.” 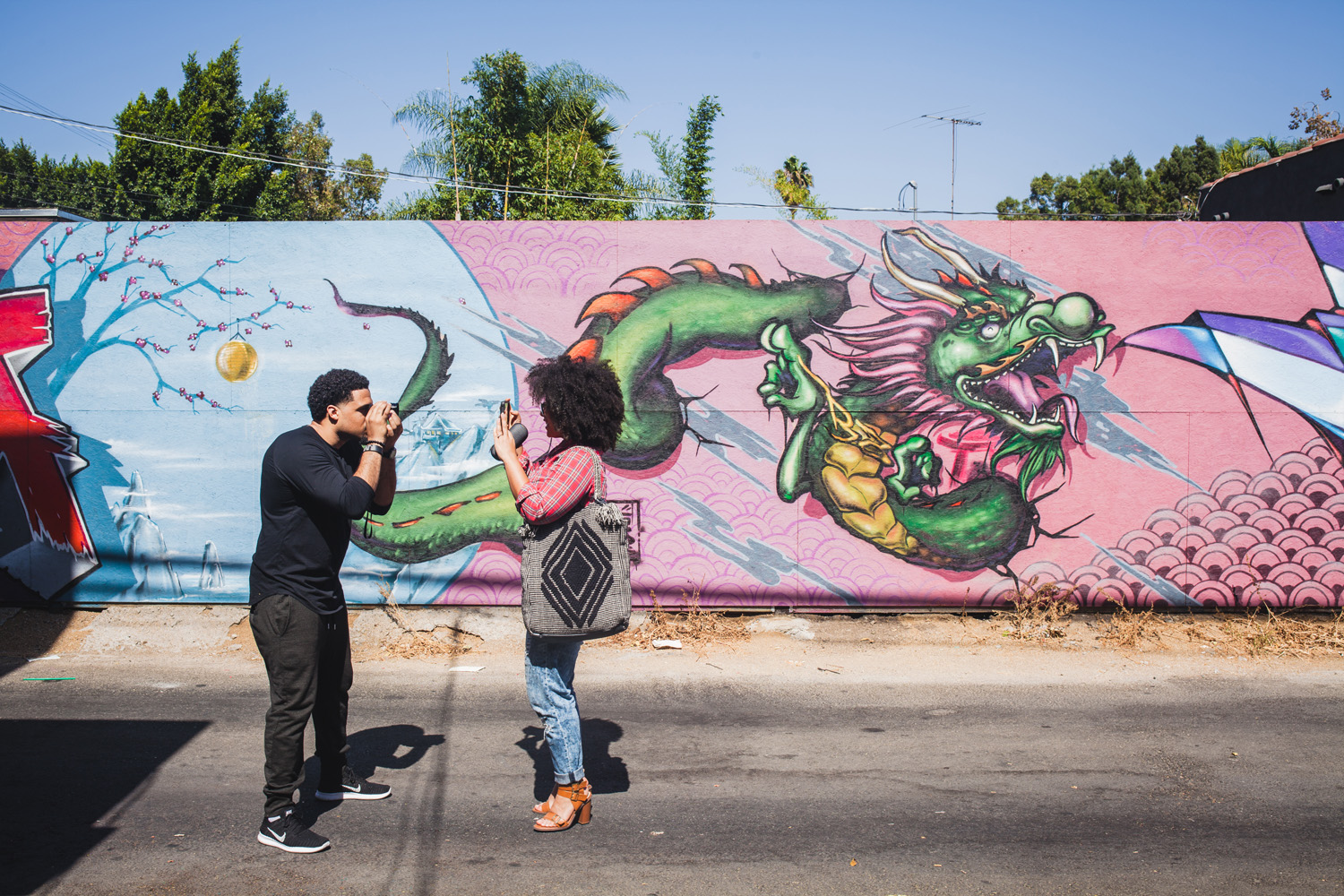 If you’re ready to watch Steven Caple’s films and TV series come to life on the big screen, know that we’re simply watching another chapter of his life unfold, and all the pieces of his story fall into place.

Though he chooses to spend the majority of his time in Cali, when asked if he would move back to Cleveland he said he wouldn’t mind being bicoastal. “I would love to start a business back at home and provide some cats some job opportunities.” Steven notes that Cleveland is a place that keeps him grounded and inspired. “Everytime I go back home just to visit, the creativity just elevates, because in my mind I’m remembering the emotions behind every single [thing] that is like layed out in Cleveland. I’m like, oh! That’s where I had my first haircut! This is where I first kissed a girl,” he says jokingly. “These emotions come from a place where you want to tell a story or share something.” No matter where Steven finds himself he is set on making sure his storytelling is a reflection of his truth.